The World’s 25 Largest Lakes, Side by Side

In many parts of the world, you don’t have to look very far to find a lake.

According to satellite data, there are roughly 100 million lakes larger than one hectare (2.47 acres) to be found globally. The largest lakes, which rival the size of entire nations, are more of a rarity.

Today’s graphic – created using the fantastic online tool, Slap It On A Map! – uses the Great Lakes region as a point of comparison for the largest 25 lakes, by area. This is particularly useful in comparing the scale of lakes that are located in disparate parts of the globe.

The largest lake in the world by a long shot is the Caspian Sea – a name that hints at a past when it was contiguous with the ocean around 11 million years ago. This massive saline lake, which is nearly the same size as Japan, borders five countries: Kazakhstan, Russia, Turkmenistan, Azerbaijan, and Iran. An estimated 48 billion barrels of oil lay beneath the surface of the basin.

The five Great Lakes, which run along the Canada–U.S. border, form one of the largest collections of fresh water on Earth. This interconnected series of lakes represents around 20% of the world’s fresh water and the region supports over 100 million people, roughly equal to one-third of the Canada–U.S. population.

Amazingly, a single lake holds as much fresh water as all the Great Lakes combined – Lake Baikal. This rift lake in Siberia has a maximum depth of 5,371ft (1,637m). For comparison, the largest of the Great Lakes (Lake Superior) is only 25% as deep, with a maximum depth of 1,333ft (406m). Lake Baikal is unique in a number of other ways too. It is the world’s oldest, coldest lake, and around 80% of its animal species are endemic (not found anywhere else).

Here’s a full run-down of the top 25 lakes by area:

For people living in Canada and the U.S., the shape and relative size of the Great Lakes system may be quite familiar. This makes the Great Lakes a fantastic point of comparison to help put the size of other world locations into perspective. To this end, we begin our Great Lakes World Tour.

First, the image below shows how the Great Lakes system would look if it was located in India. 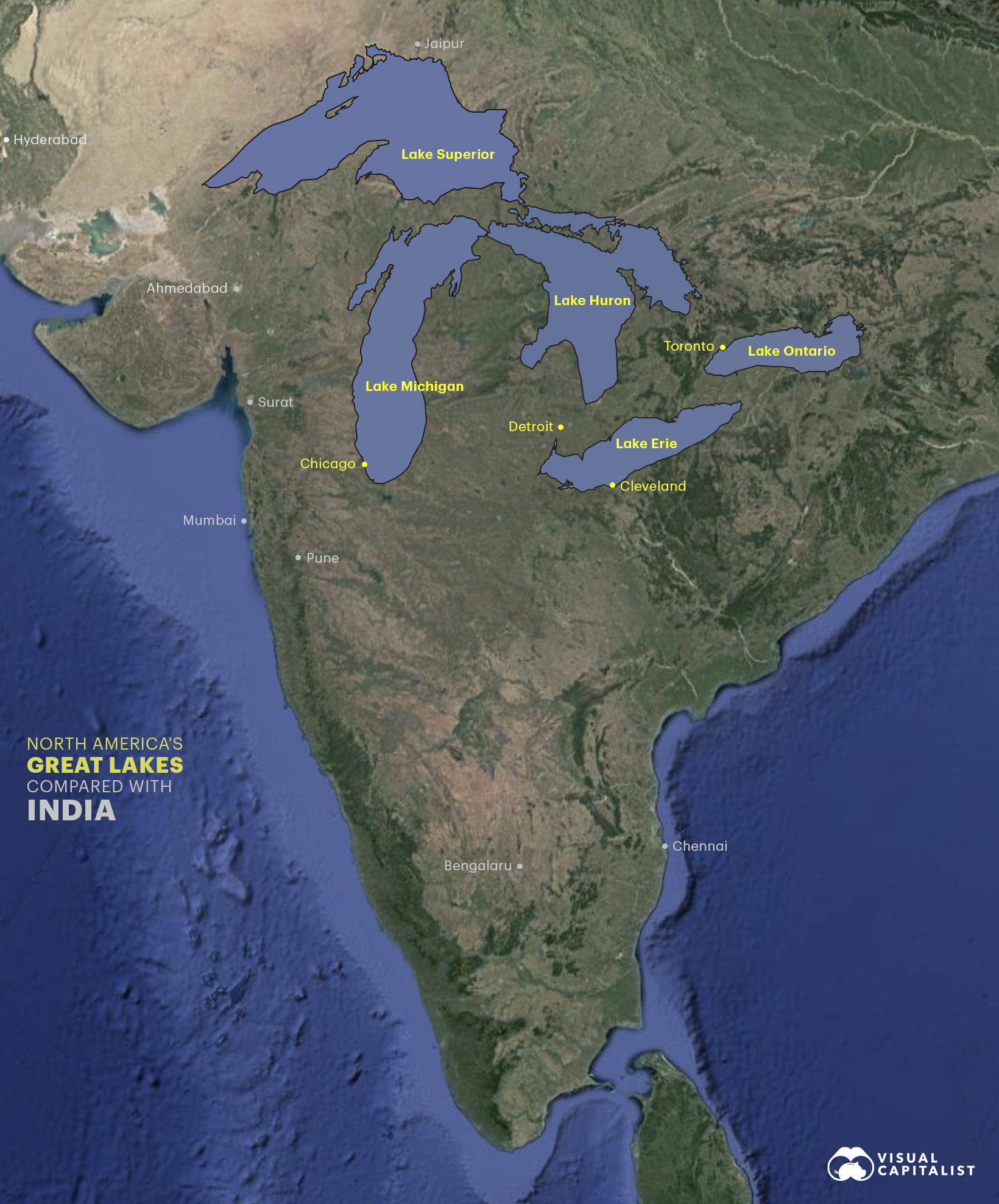 Distortions on commonly used maps can downplay the size of India compared to more northern nations. This view of the Great Lakes can help put India’s true size into perspective.

Next, we look at the Great Lakes overlaid within Central Europe. 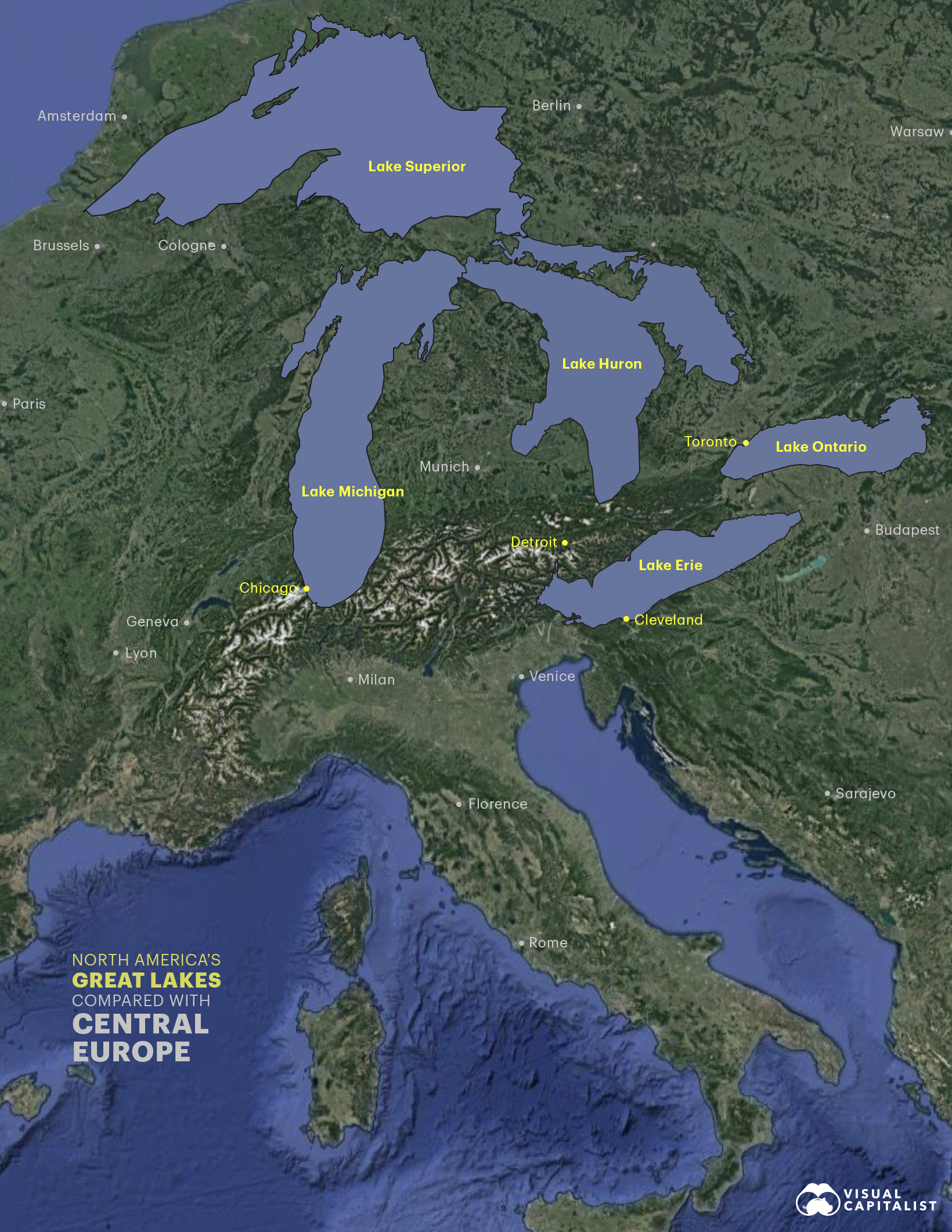 In the context of Europe, the lakes are so large that they extend from the Netherlands over to Slovakia. Lake Superior’s surface area of 31,700 mi2 (82,000 km2), is similar in size to Austria. Here’s are the five Great Lakes and European countries of equivalent size: Australia’s lack of glacial history means that there are few permanent freshwater lakes in the country. Many of the country’s largest lakes only fill up during periods of excessive rainfall.

Shrinking out of the rankings

Not far from the world’s largest lake, straddling the border between Kazakhstan and Uzbekistan, lay the sand dunes of the Aralkum Desert. In the not so distant past, this harsh environment was actually the bed of one of the largest lakes in the world – the Aral Sea. 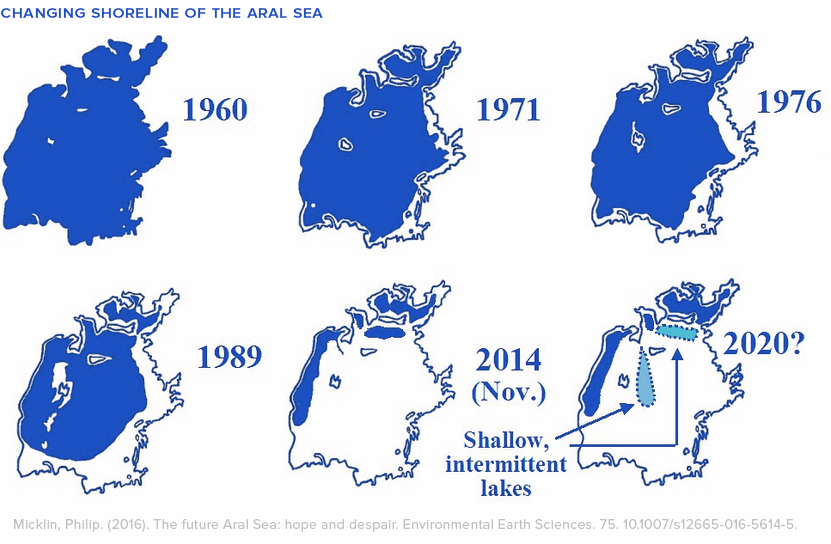 For reasons both climatic and anthropogenic, the Aral Sea began receding in the 1960s. This dramatic change in surface area took the Aral Sea from the fourth largest lake on Earth to not even ranking in the top 50. Researchers note that the size of the lake has fluctuated a lot over history, but through the lens of modern history these recent changes happened rapidly, leaving local economies devastated and former shoreside towns landlocked.

How we work to reverse damage and avoid ecosystem collapse in vulnerable lakes will have a big influence on how the top 25 list may look in future years.

The post The World’s 25 Largest Lakes, Side by Side appeared first on Visual Capitalist.

Bringing the World Into Focus: A Guide to MSCI Indexes